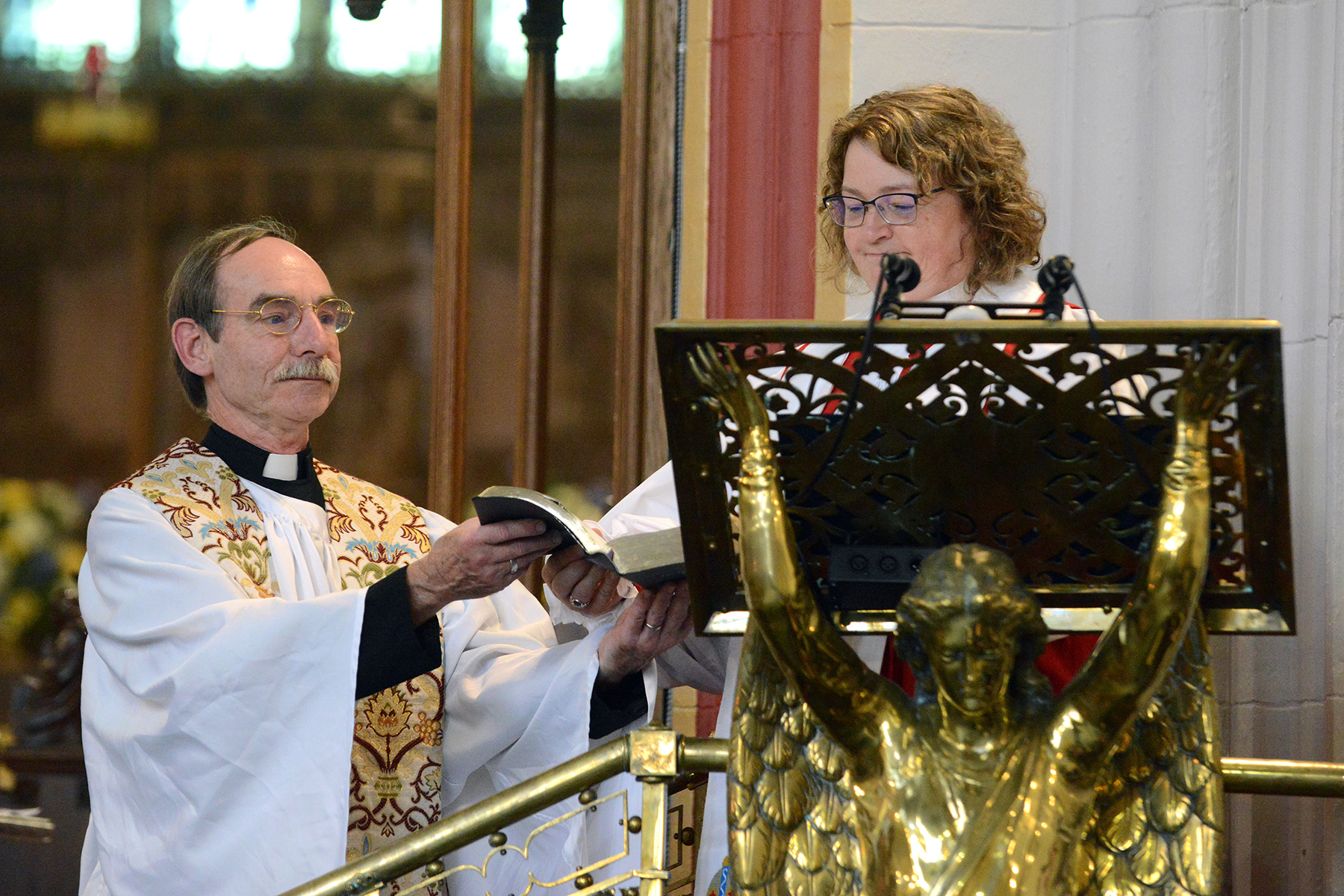 The Right Rev. Sandra Fyfe was elected Diocesan Bishop on September 12, 2020, and consecrated on November 30, 2020; the 17th person to hold the post. A graduate of Queen’s Theological College, St. John’s, NL with her Master of Divinity, Sandra was ordained deacon in 2000 and priest in 2001. She has served in the diocese of Eastern Newfoundland & Labrador as well as Nova Scotia and Prince Edward Island. She was Archdeacon of the South Shore Region until 2009 and Archdeacon of the Valley Region until 2017.

Paul grew up in Tilton, New Hampshire, where he and his family were active members of Trinity Episcopal Church. After completing a degree in Electronic Engineering, he discerned a call to ordained ministry which led him to pursue a degree in Psychology at Plymouth State University, in New Hampshire, before moving on to Huron College, London, ON where he graduated with a Master of Divinity. Ordained in the Diocese of Quebec, Paul served in Quebec and then in the Diocese of Western Newfoundland and Labrador. He then moved to Dartmouth, NS to serve as Rector of Christ Church until beginning his ministry at All Saints Cathedral in the fall of 2008. Among his interests are ministry with children, preaching, music, and pastoral care. Paul is married to the Rev. Frances Drolet-Smith and they have two adult children. Dean Paul can be reached by email here.

Deacons of the Cathedral Church

Reverend Ray Carter is a lifelong member of the Cathedral Congregation. He was baptized, confirmed and married at the Cathedral Church. Ray has been a server, a lay reader and a Sunday school teacher. He has served as a member of Council several times and spent five years as the Dean’s Warden. In 2001 he was awarded a Diploma in Theology and Ministry from the Atlantic School of Theology and was Ordained Deacon in 2007. In 2006 Ray made vows of Life Profession as a Tertiary in the Third Order Society of Saint Francis.

Reverend Maggie Whittingham-Lamont was ordained to the diaconate in 2015 and holds a certificate in theology from AST. She is the Regional Director of the Mission to Seafarers (MTS) Canada and the Chaplain at the Mission to Seafarers in Halifax. She is on the executive of The Mission to Seafarers Canada and is a member and past two-term president of the North American Maritime Ministry Association. She is secretary of the Parish Council of St. James’, Herring Cove. Maggie undertook a work exchange to Sri Lanka in 2008 and travelled to Hong Kong in 2009 where she contributed to a paper on “Excellence in Seafarer Centre Management”.

With over 15 years of leadership experience in the social-profit arena Gillian is delighted to bring extensive development, fundraising, administrative, strategic planning, and supervisory knowledge to the Cathedral Church. Her work with organizations and churches is comprised of the creation and implementation of programs that engage, fundraising that sustains, and stewardship that is meaningful. Her work is informed by a deep knowledge of the particular exhilaration and stress of working for long-term structural change and beginning and sustaining programs. While Gillian has lived in almost every province in Canada, she has always called Nova Scotia home and is enjoying living near Peggy's Cove with her family. Gillian can be reached by email here.

Russ has been involved in church music since he played for a Methodist Sunday school on the Eastern Shore of Maryland in the 1950’s. His formal music education includes a Bachelor of Music from the Peabody Conservatory of Music in Baltimore and a Master of Arts in Music Education from Arizona State University. Russ taught public school music many years as well as singing in several choral organizations.

Paul Halley is a Grammy Award-winning composer, choral conductor, and organist. He received his early musical training in Ottawa, and at sixteen became an Associate of the Royal Conservatory of Toronto. He received his MA from Trinity College, Cambridge, where he was Organ Scholar, and was made a Fellow of the Royal College of Organists. He served as Organist and Choirmaster at the Cathedral of St. John the Divine, NYC from 1977-1989.  Paul later settled in Connecticut and in 1991 founded the choirs, Chorus Angelicus and Gaudeamus, which are still active today. He relocated to Halifax and in the summer of 2015, Paul was appointed Organist and Director of Music at the Cathedral Church. Paul and his wife Meg live on the South Shore of Nova Scotia. To learn more about Paul click here. Paul can be reached by email here.

Nick Halley is a drummer/percussionist, keyboardist, composer, and conductor. Along with being the Assistant Director of Music at the Cathedral Church, he is also the Founder and Artistic Director of Capella Regalis Men and Boys Choir. Nick founded and for 11 years (to 2021) directed The King’s Chorus, a choral society for members of the King’s and Dalhousie University communities in Halifax. For the 2013-14 season, Nick was the Host of CBC’s national radio program, Choral Concert. As a drummer and world percussionist, Nick performs and records internationally with a wide range of musicians and has taught in workshop venues around the world.