Over 100 pieces of needlepoint, stitched by members of All Saints’ Cathedral and of various churches in the Diocese, are found throughout the Transept, Chancel, Sanctuary, and in St. Luke’s and St. Stephen’s Chapels.

The Transept Litany Desk kneeler designs reflect the carvings in the wood.

Hanging on the backs of the small chairs are Parish Kneelers contributed by 42 Diocesan parishes. Designs have a symbolic or geographical significance to the parish. The seven pieces at the altar depict symbols for the Parable of the Good Samaritan and St. Luke, the Physician. Colours match those in the stained-glass window over the “breezeway” door.

The Dean’s Stall cushion design is the wood carver’s interpretation of the Dean & Chapter crest. The Verger’s Stall and the Pre-precentor’s Stall have the Canterbury Cross as their centre design. The symbol for Saint Cecilia, patron saint of music, is found on the Precentor’s Stall cushion. The cushions in the Canon Stalls repeat the shields of the British saints carved above the stalls. The cushions and kneelers for the Bishop’s Cathedra and the Diocesan Chancellor’s Stall bear their crests.

In the south/left corner is an antique chair with cushion and kneeler. The kneeler design has the winged eagle symbol for St. John the Evangelist in memory of Dean Llwd’s book on the life of St. John. The centre stall to the right of the High Altar has the WA-ACW 100th Anniversary cushion and kneeler. To the left of the High Altar on the Bishop Suffragan’s Stall is a cushion with the bishop’s crest as carved above the stall and a kneeler provided by The Mother’s Union. Also used at the High Altar rail are four white wedding kneelers.

The three altar rail kneelers trace the story of the Cathedral in “churches”, with pictures of St. Paul’s (the first Cathedral), St. Luke’s, St. Alban’s and St. Stephen’s. The congregations of the latter three joined to form All Saints’, the present cathedral church, which was dedicated in 1910. As well, there are two priest’s kneelers, a prayer desk kneeler, and a chair cushion. Congregational chair kneelers in this Chapel are blue.

One of the most outstanding features of the Cathedral Church of All Saints’, Halifax, is its magnificent woodwork. As one moves up the centre aisle under the vaulted wooden ceiling, the carved oak Pulpit to the left, a memorial to Bishop Binney has a place of prominence. It was dedicated by the Primate of All Canada before the sermon on the Cathedral’s opening day in September 1910. The carved figures of SS. Columba, Augustine, Chrysostom, Paul, and Peter – famous preachers all – are featured, as well as the figure of the Preaching Friar at the newel post of the stairway, and, under the pediments, the tiny Church Mouse, an Angel with the Book, a shell for Baptism, a Rose, and a Hand. Over the pulpit hangs a small, hand-carved Crucifix, brought from the scene of the Passion Play at Oberammergau, Germany, by a dedicated Cathedral member. Nearby is the beautiful Litany Desk, carved by the English firm of Jones & Willis, and, appropriately, bearing the carved words: Hear Us, O Lord.

Upon entering the Chancel, furnished in Austrian oak, richly carved by experts in North America and abroad, on either side the figures of the Saints of the United Kingdom: on the right are St. David and St. George and on the left are St. Patrick and St. Andrew.

The Dean’s Stall was given in memory of Dean LLwyd and bears the crest of the Cathedral coat-of-arms and those of several Deans.

The Choir Stalls, made by the Bromsgrove Guild Canada, Ltd., Montreal, have angel figures on each end, each with individual faces. The Canons’ Stalls above the Choir Stalls have carved shields of the saints of the English Church: Chad, Oswald, Alban, Theodore, Augustine, Swithun, Alphege, Anselm, Hugh, and Keble on the north side, and in descending order on the south side are King Charles the Martyr, Thomas Becket, Edward the Confessor, Dunstan, Cuthbert, Paulinus, Columba, Joseph of Arimathaea, Alban, and the Venerable Bede. 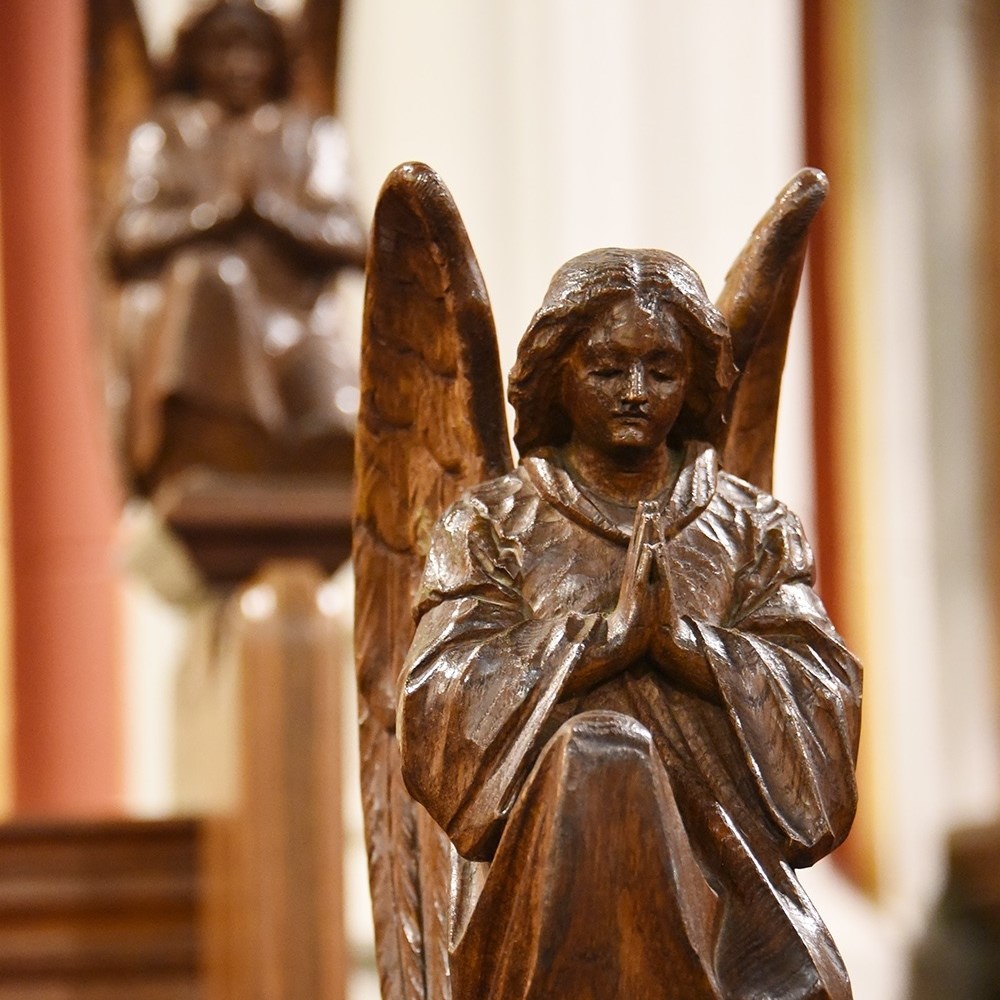 The Chancellor’s Chair, from Bromsgrove, England, was dedicated by Bishop Waterman in 1960 and is seen just before the Bishop’s Throne or Cathedra. This latter is truly a rare and beautiful example of the woodcarver’s art. Bearing the arms of the Diocese, it was the gift of the Bicentenary Church Congress held in Halifax at the time of the opening of the Cathedral in September 1910.

Within the Sanctuary, there is the Sedilia (seating for the presiding clergy) and the Credence Table, the latter of solid oak, beautifully carved with symbolic wheat ears and bunches of grapes, dedicated at the first Service of Holy Communion. Dominating the Sanctuary, below the Great Window is the High Altar, of carved oak, one of the most beautiful of its kind in Canada. A memorial to Bishop Binney and dedicated at the first Eucharist at 7 am on September 3, 1910, the front bears carved figures of the four Cherubim of prophetic vision.

The oak Reredos or Screen immediately above the Altar with its magnificent carving was one of many gifts of the Diocesan Women’s Cathedral League, whose mandate it was to beautify the interior of the Cathedral. The carved figures on the Reredos are, from the extreme left: St. Nicholas, St. Cecilia, and the Prophet Isaiah; above the left door: St. Paul; middle left: St. Peter, the Virgin Mary, and St. John; in the centre above the altar: the Ascending Christ; at the middle right: St. John the Baptist; St. Mary Magdalene, St. James the Great; above the right door: the Venerable Bede; at the extreme right: St. Michael, Dorcas, and Moses. The Panels above the left door are the Tree bearing good fruit and those above the right door are the Tree that bears evil fruit (Matthew 7: 16 – 20).

To the left of the High Altar is the Bishop’s Chair in the Sacrarium. It is of rare design in black oak, likely of early 17th century craftsmanship. The Altar Rail is supported by the carved figures of the four Evangelists: John, Luke, Mark, Matthew, and two other apostolic figures. The oak railings as one descends from the Sanctuary to the Chancel were a gift of Mrs. F.B. McCurdy.

One cannot speak of the woodwork in the Cathedral without mentioning St. Luke’s, St. Alban’s, and St. Stephen’s Chapels. St. Luke’s Chapel is situated now on the southwest (ecclesiastical east) wall and has the old Altar and Reredos of the original St. Stephen’s Chapel, the Bishop’s Chapel, on Robie Street, the congregation of which joined that of St. Alban’s and St. Luke’s Pro-Cathedral, whose building was destroyed by fire in 1905, in forming the Cathedral congregation.

St. Alban’s Chapel now houses the Cathedral Columbarium and much of the woodwork is more recent. Of note are the doors as you enter, dedicated to the Glory of God and in loving memory Dean J. Austin Munroe.

The current St. Stephen’s Chapel in All Saints Cathedral is dedicated to the memory of the Rt. Rev. Hibbert Binney, whose dream it was to erect a stone Cathedral for the oldest colonial Diocese. He did not live to see that dream realized.

Of note is the superb Reredos behind the Altar in St. Stephen’s Chapel, being in the form of a triptych, the central panel of which features Mary and John on either side of the Crucified Christ, designed in accordance with pre-mediaeval crucifixes: the virile strength and calm, self-contained dignity expressed in the figure and face of Jesus express the Anglican view of the Eucharist with its emphasis on the Love Triumphant rather than the Love Suffering. The other panels are left, St. Stephen, and right, St. Lawrence, vested as deacons in dalmatics, and bearing the appropriate emblems of their martyrdom. Above the triptych proper is the figure of the Risen Christ, surmounted by a crocketed pinnacle.

The Altar Rail and Credence Table, further gifts of the Diocesan Women’s Cathedral League, are of Canadian manufacture and are matched by the Prayer Desk and the Sanctuary Chair.

While the early Cathedral Prayer belongs to an earlier time, its appeal is timeless: that God may grant us the help of His grace that we who desire to complete a Cathedral for this diocese to the glory of His Name, the honour of His holy church, and the welfare of His people, may be blessed in our endeavours, and enabled to bring it to perfection through the Christ who liveth and reigneth with Him and the Holy Spirit, ever one God, world without end. Amen.